The “Training and Mentoring Program for Women-Led Business: Liberia, DRC, Rwanda,
Senegal, Mozambique and South Africa” was created by the Center for Diversity in Global Ma-
nagement and Femmes Africa Solidarité (FAS),with the collaboration of AECID, to strengthen
the inclusion of African women in the economic mainstream by empowering them to generate
wealth in conditions of equal opportunities.

The goal was to assist in the transformation and expansion of the participant’s businesses
into consolidated medium-sized enterprises,generating employment and economic benefits
in the entrepreneur’s communities.

The objectives included:
• Train by improving management and entrepreneurial skills of participant businesswomen so that, equipped with the necessary
tools, they can progress on the consolidation of their competitive position in the market.
• Empower participant business women by the expertise of mentors and tutors.

• Connect participant business women among them, with relevant parties in their business sector and capital risk markets.

PROGRAM STRUCTURE
During the first phase, During the first phase,Professor Martin de Holan and Professor de Anca trained a group of consultants that were in charge of each different country and had to finally select 23 high potential entrepreneurs out of 300 candidates. Also, a mapping report on the political and socio-economic situation of the six countries involved in the program was published.

As part of the second phase, candidates were trained by Professor de la Vega in Senegal. A second Workshop took place in Madrid, where they got more in-depth training. 15 IMBA IE Business School students were selected to support them as tutors. Tutors spent the period August-September in the respective countries of the participants they were supporting. Their mission was to help the participants materialize their learning from the workshop in business plans for their projects that they would present
to the Business Plan competition. After gaining firsthand knowledge of their companies, they continued with an online tutorship that concluded with the presentation of the business plans.

In the third and final phase, developed during the 2009 / 2010 academic year In Las Palmas in Gran Canaria, a Negotiations Workshop was held. The event took place in an exceptional venue: Casa Africa. The 23 women entrepreneurs attended workshops on IT networking,mentoring and negotiations, led by IE Business School professors. Each of the participants presented her business plan to a jury of professional mentors and experts from FAS and IE Business School. The participants had elabo-
rated their business plans in previous phases of the program assisted by IE Business School students who acted as advisors. Some of these advisors attended the event to continue to support their advisees. Finally, in an emotional ceremony, the winners who will go on to the last step of the program were announced.

As a conclusion to the program, the winners received the support of high profile international mentors. The role of the international mentors was to guide them in their way towards the investors’ panel. The Investors Panel was held in Pretoria, South Africa, and attended by Hon.Dr. Graça Machel, among other distinguished guests.

The IE Business School and the Fundación Getulio Vargas from Sao Paulo (FGV-EAESP) participated in the project “10.000 Women”, promoted by Goldman-Sachs. 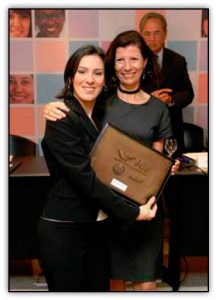 Begun in 2008, the philanthropic program is a five-year initiative to promote social

change through the economic empowerment of women. Thus far, it has reached 2,000 women in more than 20 countries, including Afghanistan, Brazil, China, Egypt, India, Rwanda and the United States.

The idea is that creating a women’s labor force is key to long-term economic growth. This would seem to be common sense rather than advanced economic theory, but such brilliance is scant in underdeveloped, war-ravaged countries
or where women are often treated as subhuman.

The program aims at providing IE women students that are currently enrolled in a IE Masters the opportunity to receive a mentor support to help them focus in their professional lives.

The mentors are recognized men and Women from different companies and sectors that give altruistically their time and experience to support a Young Women in their professional carriers.

The mentoring Committee oversees the program and manage the matching process attending the preferences of both mentors and mentees.

The WIB promotes the program among IE students receive the mentees applications and develops the mentee selection process. 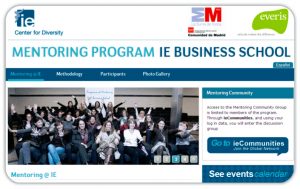 Young women from Saudi Arabia have a Bright Future to look forward to.